Tracing the History of 'Deal Toys' from Lucite to Brass Balls

NEW YORK (The Deal) -- A common adornment of dealmakers' offices and cubicles, "deal toys" commemorate the work they spend their lives doing. But beyond being souvenirs, deal toys have a history, which D. Graham Burnett explores in Tombstones and Toys, an entertaining essay that appears in the current issue of Cabinet Magazine.

What a Deal Toy With Lucite-Encased Brass Balls Foretold About Drexel Burnham.   courtesy of "The Street"

"Businessmen and bankers have given each other appreciative tchotchkes since the dawn of banking: Silver plate among the financiers of the Hanseatic League, crystal bowls exchanged by London magnates, engraved clocks in the Gilded Age," writes Burnett, a professor of the history of science at Princeton University.

The successor form is made from Lucite, a form of PMMA, or poly(methyl methacrylate), which was developed for use in shatterproof cockpit windscreens. By the 1950s, PMMA was sold in craft kits that allowed home hobbyists to encase mementos in polished Lucite, and coin collectors soon adopted the medium.

The deal toy is the marriage of Lucite with the tombstone advertisement, a term that dates to the late 19th century, when printers used it to refer to "column-width newspaper ads run without any illustration or typographical ornamentation," Burnett writes. After the crash of 1929, the Securities Act of 1933 placed strict requirements on the advertisements that banks were allowed to run. 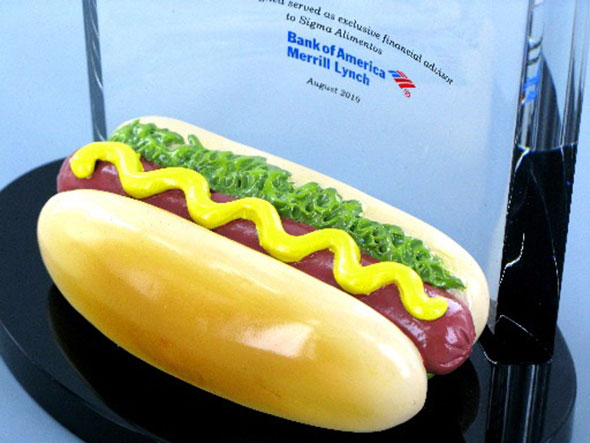 Those restrictions meant that the tombstone ad became the format that companies and banks used to publicize financial transactions such as initial public offerings. From at least the late 1960s, law firms and banks produced Lucite slabs that encased the tombstone ads announcing new partner classes. By the late 1960s, banks were commemorating their new partner classes by embedding the partnership announcements in Lucite.

Need to translate this page? Copy the URL and  Click Here